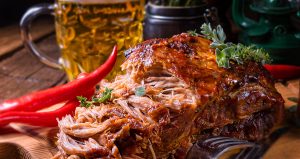 Pork is one of the most versatile meats available, used in a huge range of products and dishes. Similar to beef, the number of cuts available can be confusing, with customers not always sure which cut of meat comes from where, or which is the best.

With this in mind, we break down the main pork cuts and products available, to give you a better idea next time you’re checking out a menu.

Both tender and tasty, pork loin is the strip of meat which runs from a pig’s shoulder to its hip. The tenderloin is a small part of the loin located towards the back of the animal inside the ribcage, providing an even more desirable and popular cut. This works well cut into medallions, stuffed and roasted for extra flavour.

Despite being one of the most popular cuts of pork, many people would struggle to tell you exactly where on the hog this quintessential pork product comes from. The answer is that it’s usually a thick slice taken from the loin. A versatile cut, it can be baked, grilled, fired or barbecued, and it goes well with a number of sides.

Less confusing than other cuts, the clue is in the name with this one. Pork belly is taken from the underside of the hog, where the meat is rich and full of deep flavours. The best way to enjoy pork belly is either slow-cooked or braised for maximum flavour, or barbecued for that smokey edge. Either way, this cut is a favourite of restaurant chefs everywhere.

Pork ribs are taken from the point where the ribs leave the spine, giving a section of loin meat between the bones. A lean and tender cut of the hog, the ribs can be served in the traditional style, or trimmed down and curled into a circle with stuffing and vegetables in the middle, to make a pork crown.

Take thin strips of meat from the belly area, cure it and smoke it, and hey presto, you’ve got bacon. The fatty nature of the meat adds to its tastiness, making bacon one of the bestselling pork products on the market. Whether you’re frying up a simple bacon butty, or using it as an ingredient in a larger dish, we just can’t imagine a world without it.

The popular banger is usually made from seasoned ground pork shoulder and/or pork loin, but any part of the hog can be used. Traditionally-made sausages also use the intestinal lining to make the casing. The meat can be mixed with breadcrumbs, grains and cereals for added texture, but a quality pork sausage will have a higher percentage of meat.

Traditionally made from pork shoulder, pulled pork is slow cooked in an oven, slow-cooker, or on a barbecue, until the meat is tender enough to fall apart at the touch of a fork. Served in a barbecue sauce or marinade, this enduring American favourite has seen increasing popularity here in the UK over recent years.

A staple of salads and sandwiches the world over, ham is typically taken from the large hind leg of the pig. It can be dry-cured or wet-cured, and like bacon it can also be smoked depending on customer preference. Ham is most popular as a pre-cooked deli meat, but you can also buy whole hams to roast at home too.

If you’re looking for a unique catering experience for your next party or gathering, why not treat your guests to a whole roast hog from The Roasting Pig. This versatile dining option is sure to bring the wow factor, and can be booked from a selection of packages to suit a range of budgets. For more information, or to request a quote, drop us a message today.